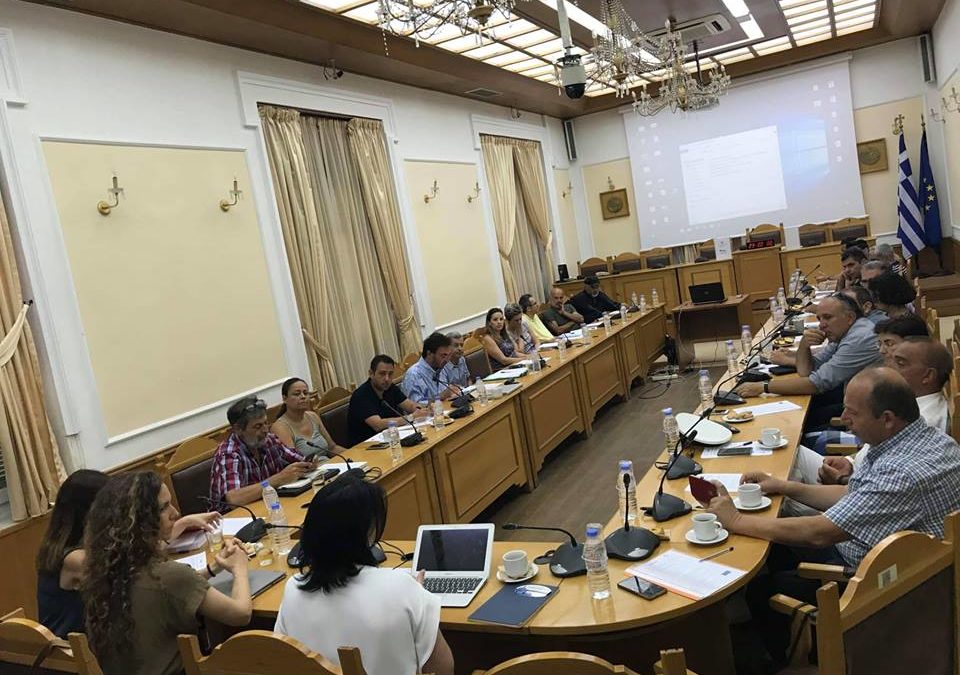 The local working group held on July 16th in Crete was attended by the most critical stakeholders of the blue economy of the island who had the opportunity to clarify doubts, discuss problems on climate impacts and draw up a plan to create synergies and take advantage of the studies of the SOCLIMPACT project.

The Vice-Governor introduced the event for European & International Affairs, Mr George Alexis, who highlighted the benefits of creating synergies between other projects and the importance of local adjustment for each region.

Given this introduction, Dr Eleni Hatziyanni, coordinator for the Project for Region of Crete focused on the meeting´s aim which is to discuss with the stakeholders who work in or by the maritime area, since Crete as an island is very active in this field. In this sense, Mrs Z Vrontisi (E3 Modelling partner-participant) also highlighted that project´s stakeholders are expected to report their ideas and provide related data. He also mentioned that south Europe is more importantly affected by climate change than North or Central Europe, which consequently affects socio-economic factors.

Dr Hatziyani proceeded to explain the aims and expected benefits from the project implementation. To this effect, it is necessary to detect business related to Blue Economy and inform all possible stakeholders through ideas’ exchange and gathering of all available information. In this regard, SOCLIMPACT project helps in estimating climate change impacts in Crete through socio-economic impacts’ analysis, in studying possible adjustment options in climate change and additionally capitalization of actions by researchers of other projects. Karali, from NOA (National Observatory of Athens)participatedin the meeting. He explained his contribution through the Work package 4 where climate change impacts data will be incorporated into models and analysis of specific climate index will take place, and consequently, a quantification of the impact will follow.

Once the presentation of the project was made and given the contributions of the partners, the stakeholders participated in a discussion table in which they highlighted the fishing and tourism sectors.

Among the problems raised, the following were listed:

– The desertification that is affecting aquaculture

– Changes in species consumed as a result of climate change

– Time-lag between legislation and available data

Among the contributions to these problems were considered the following:

– Setting up a team which will detect areas of interest and will face entrepreneurial activity about climate change.

– Use SOCLIMPACT project as a trigger discussion and support for fishermen

– A holistic approach through the combination of other projects as CERES or CLIMEFISH.

– Start with the most crucial sector in terms of emission and then proceed with the others (in this regard, the project prioritizes climate change impact. Economic model analysis will show the most significant sector)

– Communication of fishers with other countries’ fisher

– Propose Piraeus Bank as a stakeholder

Finally, the event closed with an explanation of how synergies were being created with the MISTRAL and PANORAMED projects. More specifically, MISTRAL Project concerns the transnational creation of cluster within different stakeholders around the Mediterranean Sea in order to create synergies and promote start-up enterprises.

PANORAMED project is about issues as: how could all stakeholders involved discuss between them, how is faced neighboring with non-European countries, how collaboration is achieved taking into consideration local particularities, how projects can be capitalized, how a proposal is prepared to be funded.

G. Alexaquis closed the event by highlighting the importance of the sectors mentioned above and the establishment of coherent policies for the islands given their particular specificities.