The Maltese Islands have a rich and long history dating back to 5900 BC. Malta went through a golden Neolithic period in which the mysterious temples on the island were built, which can still be found on the islands today. In later times, the Phoenicians, Cathaginians and Romans all left traces on the islands. St. Paul brought Christianity to the island when he was shipwrecked in 60 A.D. The Arabs conquered the island in 870, influencing the Maltese language as it is today. Up to 1530 Malta was an extension if Sicily before Malta was given to the Order of St. John of Jerusalem by Charles V who took Malta through a golden age being a key player in the European cultural scene. In 1798, Napoleon took over Malta from the knights on his way to Egypt. The French however did not stay long as the English, requested by the Maltese, impeded the islands in 1800 and Malta voluntarily became part of the British Empire as a protectorate. The British ruled until the independence in 1964. Malta became a republic in 1974 and joined the EU in 2004.

The country of Malta refers to a group of islands and rocks in the Mediterranean Sea, with a total surface of 316 km2. The three largest islands, Malta, Gozo and Comino, host all 515,000 inhabitants. The low, rocky islands can be identified by their coralline limestone and steep coastal cliffs. The highest point of the islands is Ta’ Dmejrek on Malta, with an altitude of 253 meters. About a third of the surface of the islands is used for agriculture. The Maltese Islands do not have any permanent surface water and some rivers only spring during extreme rainfall. The islands have to deal with a shortage of fresh water and depend on desalination.

Malta is a democratic republic which is governed by its parliamentary representatives. The president is the official head of state and holds the executive authority over the island. The prime-minister of the island is the head of government and the highest official of Malta. They hold the control over the government and its general direction. The two biggest political parties of Malta are the Christian Democratic Nationalist Party and the Social Democratic Labour Party. The current president, Dr George Vella, and prime-mister, Robert Abela, are both members of the Labour Party.

The Maltese economy remains a service-led economy throughout the 2015-2100 period with an increasing contribution of recreational, accommodation and other market services. Moving towards the end of the century, the share of primary and secondary sectors in gross value-added falls significantly to the benefit of sectors with higher value added, as observed in recent years. Blue growth sectors increase in importance throughout the 2015-2100 period. Tourism sustains or slightly increases its share in GDP throughout the period. Similarly, water transport maintains its share (0.5% of GDP) while fisheries (which includes aquaculture) and electricity gradually see a lower contribution to gross value added. 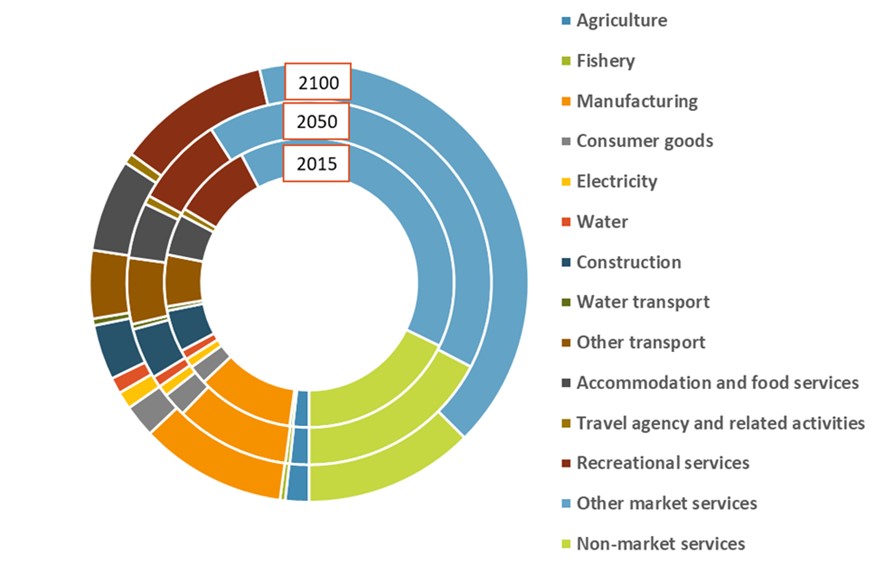 Tourism is one of the most important sectors for the Maltese economy contributing to approximately 15% of the GDP. Tourists are visiting Malta for the island’s rich history and culture as well as aquatic activities. Lately, medical tourism has also become...

END_OF_DOCUMENT_TOKEN_TO_BE_REPLACED

The following partners are involved in the study of Malta: AQUABIOTECH GROUP – (ABT) The following local stakeholders have declared their interest in participating in the local study of Malta in the frame of the Soclimpact project: MALTA MARITTIMA...