Although references to Madeira’s archipelago date from the roman empire, where they may be known as the Isles of Blest, official discover of the islands were dated to 1419 when captains João Gonçalves Zarco and Tristão Vaz Teixeira were luckily driven to the island of Porto Santo during a strong sea storm, which ultimately saved their lives. The island that rescued the two captains was then, accordingly, named Porto Santo (Holly Port). Soon after, as Madeira is visible from Porto Santo, the main island of the archipelago was also discovered and called Madeira (Wood) for its luscious natural forests.

Arriving at the 600 years since the discovery of the archipelago, we can identify three great stages for the regional economy:

Following the sugar cycle, Madeira became a prime fortified wine producer, producing what was considered then as the most popular luxury beverage in Colonial Western Hemisphere – Madeira wine, which was famously used to toast to the Declaration of Independence of the United States of America.

The last stage of Madeira’s economy still stands today and was brought by tourism. The tourism industry of Madeira started because Madeira was thoroughly used as a port of call for vessels traveling to or from South Africa and beyond, or the American continent. As maritime transport evolved Madeira’s function as a port of call for merchandize being traded between continents disappeared, but the seeds for the tourism industry remained and flourished, until becoming, by far, the main economic activity of the archipelago nowadays.

Madeira is an Atlantic island with 740,7 Km2, that is 978 km southeast from Lisbon, the Portuguese capital, and 700 km from the Africa Coast.

The island has a steep orography, with its highest peak, Pico Ruivo, standing 1862 meters above sea level. The mountain range of the island has an east-west orientation, perpendicular to the main wind direction from north, which is responsible for the luxurious natural forest of Madeira, known as Laurissilva – Laurel forest, that is classified as a World Heritage site by UNESCO.

Madeira is a volcanic mountain in the middle of the Atlantic, that rises from the sea-bed at about 5 km deep. This characteristic and the relative youth of the volcanic complex that formed Madeira, makes for a small costal platform. As a result, madeira coastal seas are not very productive in fish but allow for close sighting of oceanic wildlife. This characteristic also allowed for a unique relationship of the population of Madeira with deep-sea resources, making us pioneers in the exploration of deep sea species like the scarab fish or the deep-sea squid (pota). 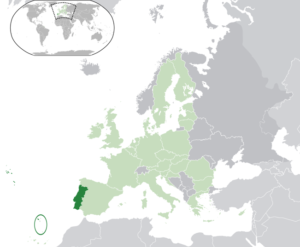 From its colonization until 1974, Madeira was a colony of Portugal, and as such, the management of the island was centered in the Crown, until the Monarchy ended in 1908, and, after, the Portuguese Government, after the republic implementation and the dictatorship that followed. With the Carnation Revolution, in April 1974, Madeira started its process of becoming an autonomous region, which was instated with the approval of the Portuguese Constitution of 1976.

Since then, Madeira has its own government, with legislative powers, its own budget and a President that holds a place in the State Council, the highest decision-making forum of the Portuguese republic.

Madeira’s archipelago has always been a Portuguese territory except for two periods, the first, from July 1801 to January of 1802, and the second, from December 1807 to October 1814, when Madeira was managed by the British Crown in response to the Napoleonic invasions and blockades and in line with the oldest alliance of the world still in effect, between the English and Portuguese, instated by the Anglo-Portuguese treaty of 1373 and ratified by the Treaty of Windsor in 1386.

According to Soclimpact projections, RAM’s economy remains a service-led economy throughout the 2015-2100 period with significant contributions to total gross value added from construction, non-market services, accommodation and food services, and other market services.

Agriculture, fishery, manufacturing and consumer goods sectors are projected to contribute. in total. less than 6% to the economy-wide gross value added. in 2100.

Total tourism activities are projected to experience a long run increase of their respective gross value-added shares. Starting from more than 11% in 2015. this share is projected to increase steadily to more than 14% until 2100. 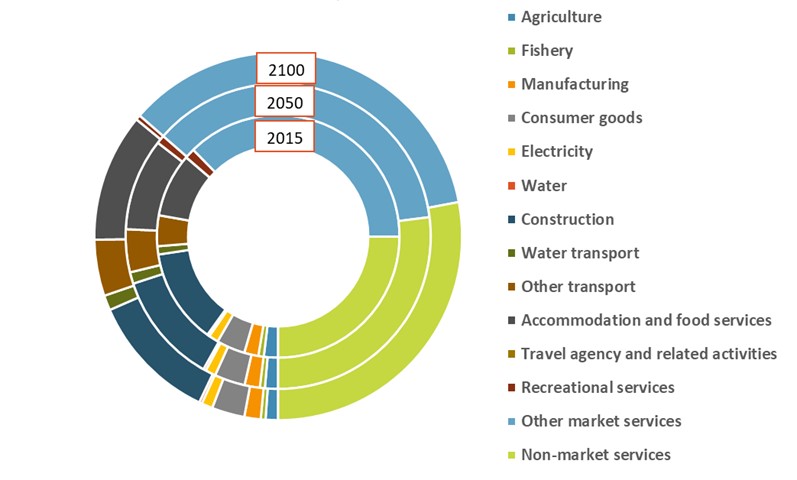 Coastal and maritime tourism in madeira is Indissociable of tourism as a whole because both sea and land activities are very geographically close and complementary. As it is, the tourism destiny of Madeira has this complementarity as one of the positive...