When the Europeans began to explore the islands in the late Middle Ages, they encountered several indigenous peoples living at a Neolithic level of technology. Although the prehistory of the settlement of the Canary Islands is still unclear, linguistic and genetic analyses seem to indicate that at least some of these inhabitants shared a common origin with the Berbers of Tamazgha.

In 1402, the Castilian conquest of the islands began. The natives of La Gomera, and of Gran Canaria, Tenerife, and La Palma, resisted the Castilian invaders for almost a century. The Castilians finally dominated the islands, but due to the topography and the resistance of the native Guanches, they did not achieve complete control until 1495, when Tenerife and La Palma were finally subdued by Alonso Fernández de Lugo. After that, the Canaries were incorporated into the Kingdom of Castile.

After the conquest, the cities of Santa Cruz de Tenerife and Las Palmas de Gran Canaria became a stopping point for the Spanish conquerors, traders, and missionaries on their way to the New World. This trade route brought great prosperity to some of the social sectors of the islands. The islands became quite wealthy and soon were attracting merchants and adventurers from all over Europe. 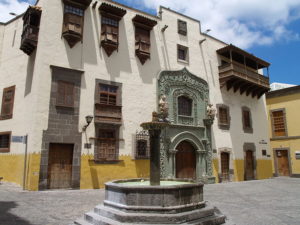 During the 189h century, the sugar-based economy of the islands faced stiff competition from Spain’s American colonies. These economic difficulties spurred mass emigration, primarily to the Americas, during the 19th and first half of the 20th century. Between 1840 and 1890 as many as 40,000 Canary Islanders emigrated to Venezuela. Also, thousands of Canarians moved to Puerto Rico where the Spanish monarchy felt that Canarians would adapt to island life better than other immigrants from the mainland of Spain. Deeply entrenched traditions, such as the Mascaras Festival in the town of Hatillo, Puerto Rico, are an example of Canarian culture still preserved in Puerto Rico. Similarly, many thousands of Canarians emigrated to the shores of Cuba. 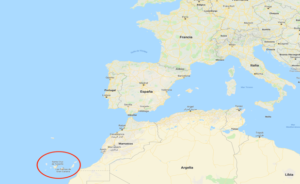 The Canary Islands are a Spanish archipelago (the southernmost autonomous community) located in the Atlantic Ocean. Actually, the islands are geographically located in the African Tectonic Plate (at 100km. away from Morocco), even though the archipelago is economically and politically European.

Trade winds and the cool waters of the subtropical North Atlantic prevent the Canary Islands to suffer from the extreme weather conditions of the nearby Sahara Desert. According to the national meteorological service for the UK, “the Canary Islands experience a Mediterranean climate typified by extremely dry summer months with warm temperatures and mild winters with more rainfall, particularly to the north of the region. In terms of temperature alone, the Canary Islands experience a subtropical climate which means that temperatures [are] mild and stable throughout the year within the range 18 – 24 °C. Summer in the Canary Islands sees consistently high temperatures in the high 20’s with only traces of rainfall on any of the islands. Despite their southerly location, temperatures do not become unbearably high due to the cooling influence of the surrounding waters of the Atlantic Ocean. The hottest days occur when easterly winds cause hot dry air from the Sahara Desert to sweep across the islands, often laden with dust. Winters in the Canaries are mild, Tenerife for example still sees average maximum temperatures of 21 °C in January despite being the coldest month.

According to the European Commission, the “Canary Islands present a wide range of possibilities in terms of technological innovation due to its strategic geographical location, its special fiscal status and the high quality of human capital it holds. On the other hand, this region also suffers from clear weaknesses caused mainly by the fragile innovative and environmental systems of the islands. The business ecosystem of the Canary Islands relies heavily on the geographical location and the particular characteristics of the archipelago. However as expected; it is mainly devoted to the service sector, with special emphasis in tourism”.

The Canary Islands’ economy remains a service-led economy throughout the 2015-2100 period with an increasing contribution of non-market and other market services. The aggregated gross value added share of agriculture, fishery, manufacturing and consumer goods sectors is projected to diminish by roughly 1.5% until 2100. The aggregated share of electricity services, water services and construction services remains relatively stable close to 13% until 2100.

The aggregated gross value added share of total tourism activities is projected to range around 13% throughout the projection period. 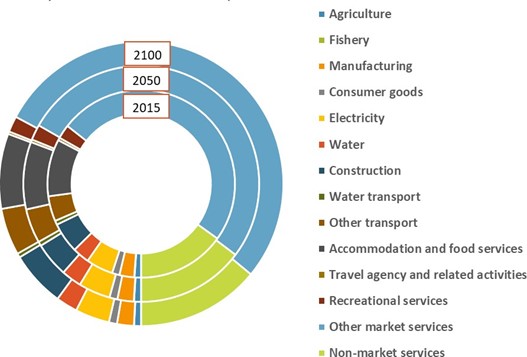 The economy of Canary Islands relies in the service sector, which accounts for 84.9% of the gross value added (GVA). Activities related to tourism have an especial importance (Instituto Canario de Estadística – ISTAC, 2019). The archipelago's beaches,...