Crete hosted the first known European civilization, the Minoan civilization which played a significant role in the development of the Greek civilization and has been also part of the Romanian and Byzantine empire. During the medieval times Crete was part of Venice, which allowed the island to benefit from the Renaissance period and has finally passed to the Turks in 1669. After a long period of political and civil upset, Crete earned its autonomy in 1896 and has re-united with Greece in 1913.

The long history of the island and its cultural heritage as well as its natural landscape, with both large sandy beaches and countless canyons (with most know being the canyon of Samaria), makes Crete one of the most attractive tourist destinations in Europe as it offers a lot of alternative activities to its prospective visitors by combining nature and culture.

Crete is the 5th largest island in the Mediterranean and the largest and most populous of Greek islands. The island’s population was estimated to 635.000 in 2019. The total area of Crete is 8.336 sq.Km. (6,3% of the total area of the Greek territory). It has a remarkable coastline of more than 1000 Km.

The island is extremely mountainous with three main mountain ranges, Psiloritis (Idi) (2456m.), Lefka Ori (2454 m.) and Dikti (Lassithi Mountains) (2148 m), which cross it from the west to east.

The climate of Crete is mild Mediterranean, with hot summers and mild winters. Nevertheless, the temperature varies between coastal and non-coastal areas due to the island’s natural landscape. In the inner island there are three mountainous ranges that cross the island from the east to the west, namely Dikti (2,148m.), Lefka Ori (2,454m.) and Psiloreitis (2,456m.)  making the climate around them colder during the winter months and cooler during the summer period. To the east and the south-east lowlands are the hottest areas in the island, with their climate resembling more to the climate of northern African countries. The coastline of the island is approximately 1,046km long.

Blue growth sectors increase in importance throughout the 2015-2100 period. In particular, tourism grows from 22.9% as a share of GDP in 2015 to 26.1% in 2100. While the water transport sector grows steadily, travel agency and related activities register a declining share in total value added as they grow with a lower rate than that of GDP. 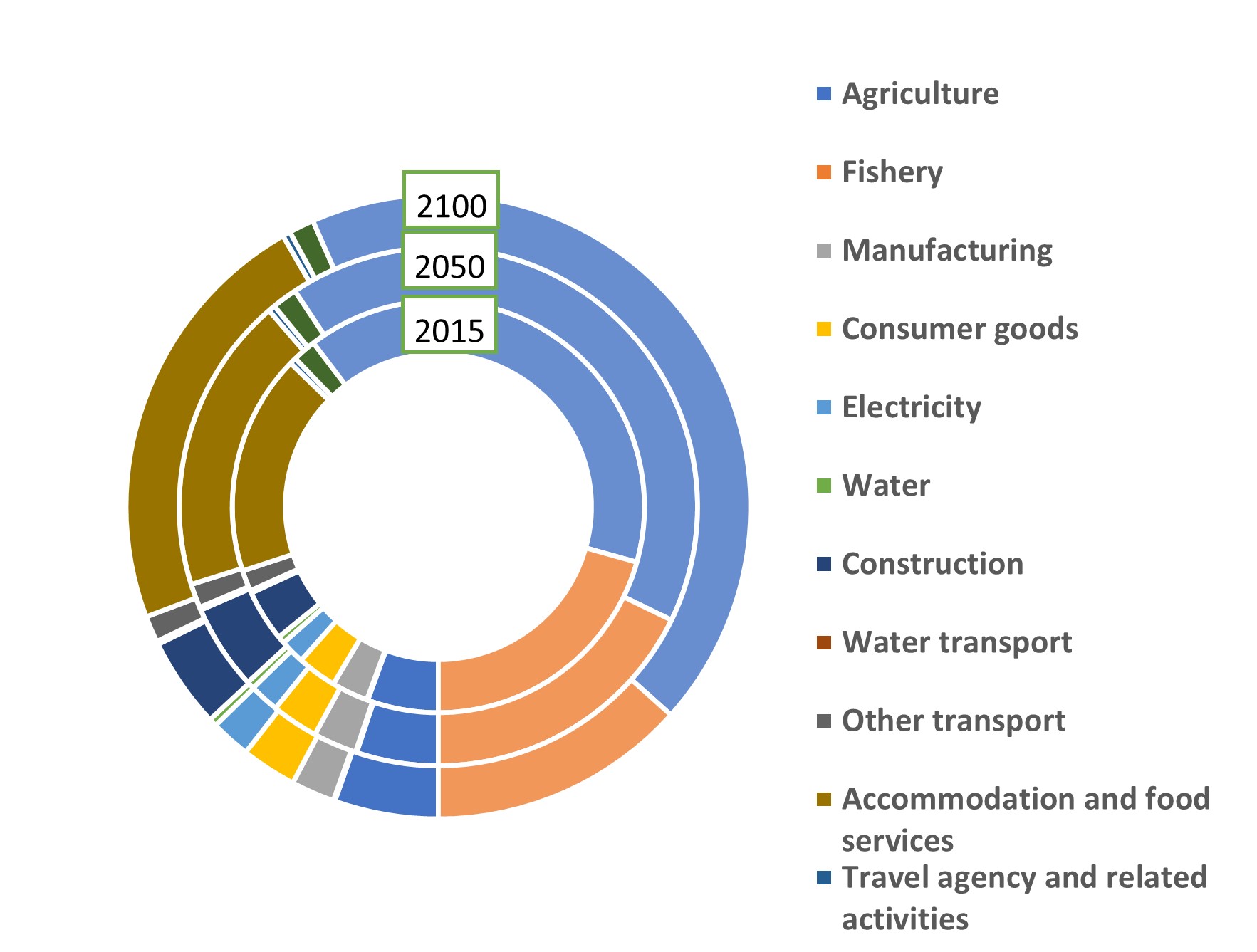 Crete is an island with incomprehensible diversity and contrasts that attracts many tourists every year. Tourism is the most dynamically developing sector and the demand gave incentives for important investments in hotel units, resulting in the qualitative...

END_OF_DOCUMENT_TOKEN_TO_BE_REPLACED

The following partners are involved in the study of Crete: NATIONAL OBSERVATORY OF ATHENS (NOA) E3-MODELLING (E3M) REGION OF CRETE (KRITI) The following local stakeholders have declared their interest in participating in the local study of Crete in the...