The first civilization on the island dates from the 9th millennium BC. (Early phase of the Ceramic Neolithic period). Cyprus developed into an important centre of Greek culture with the settlement of the Greek Mycenaeans-Achaeans, between the 13th and 11th century BC. who brought with them their language and culture and since then, decisively determined the cultural identity of the island. In the middle of the 9th century BC. Phoenician settlers began to arrive in Cyprus, who gathered mainly in the coastal city of Kiti. Conquerors such as the Assyrians, the Egyptians and the Persians followed (8th – 4th century BC). From 30 BC. until 330 AD Cyprus belongs to the Roman Empire. However, the island managed to maintain its Greek identity and national heritage, elements which were strengthened when it became one of the most important centres of the Ptolemaic Empire of Egypt during the Hellenistic period (310-30 BC .X.) And later of the Greek Orthodox world of Byzantium (330-1191 AD).

The Greek language and culture prevailed through the following centuries, even though Cyprus successively came under the rule of foreign conquerors, Richard the Lionheart and the Order of the Knights Templar (1191-1192), the Franks (1192). 1489), the Venetians (1489-1571), the Ottoman Turks (1571-1878) and the British (1878-1960). The Greek Cypriots waged a liberation struggle against British colonialism from 1955 to 1959. In 1960 Cyprus acquired independence and was declared the Constitutional Republic. Under the Zurich-London Agreements, Greece, Turkey and Britain were defined as the guarantors of the country’s independence, while Britain would maintain two sovereign bases on the island. The British military bases on the island, one in Akrotiri.

Cyprus is a small island of 9.253 sq. km (3.572 sq. miles), extending 240 km (149 miles) from east to west and 100 km (62 miles) from north to south. It is strategically situated in the far eastern end of the Mediterranean (33° E, 35° N), at the crossroads of Europe, Africa and Asia, and in close proximity to the busy trade routes linking Europe with the Middle East, Russia, Central Asia and the Far East.

Cyprus has a Mediterranean climate: hot dry summers from June to September and mild, wet winters from November to March, which are separated by short Autumn and Spring seasons of rapid change in weather patterns in October, April and May. Sunshine is abundant during the whole year, particularly from April to September when the daily average exceeds eleven hours. There are two mountain ranges on the island: the Pentadaktylos range which runs along almost the entire northern coast, and the Troodos massif in the central and south-western parts of the island which culminates in the peak of Mount Olympus, 1.953 m above sea level. Cyprus’ 648 m coastal line is indented and rocky in the north with long sandy beaches in the south. Between the two ranges lies the fertile plain of Mesaoria.

Cyprus became politically independent from British rule in 1960. The Turkish invasion, launched on 20 July 1974, resulted in the occupation of 35,2% of the island’s territory and about 200.000 Greek Cypriots were displaced.

On 1 May 2004 the Republic of Cyprus became a full member of the EU and in January 2008 Cyprus joined the Eurozone. Accession to the EU was a natural choice for Cyprus, dictated by its culture, civilization, history, its European outlook and adherence to the ideals of democracy, freedom and justice. Since its accession to the EU, Cyprus has undergone significant structural reforms that have transformed its economic landscape. Trade and interest rates have been liberalized, while price controls and investment restrictions have been lifted. Private financing has been introduced for the construction and operation of major infrastructure projects and monopolies have been abolished.

The new political context created by the accession to the EU is also expected to impact positively on the efforts to reach a comprehensive settlement to the division of Cyprus that will reunite its people and reintegrate its economy.

The Cyprus economy remains a service-led economy throughout the 2015-2100 period, with an increasing contribution of market, accommodation and food services. Moving towards the end of the century, the share of primary and secondary sectors in gross value added (GVA) falls further to the benefit of sectors with higher value added. Demand for construction services increases in line with investment demand but with a lower growth rate, while transport services increase with a rate higher than GDP in order to enable the growing economic linkages of the island with the rest of the world.

Blue growth sectors increase in importance throughout the 2015-2100 period. In particular, the contribution of tourism in total value added grows from 20% in 2015 to 28% in 2100. While the water transport sector grows steadily, travel agency and related activities register a declining share in total value added as they grow with a lower rate than that of GDP. The graphic illustrates the changes of the sectorial decomposition of GVA for Cyprus from 2015 until the near future (2050) and the distant future (2100). 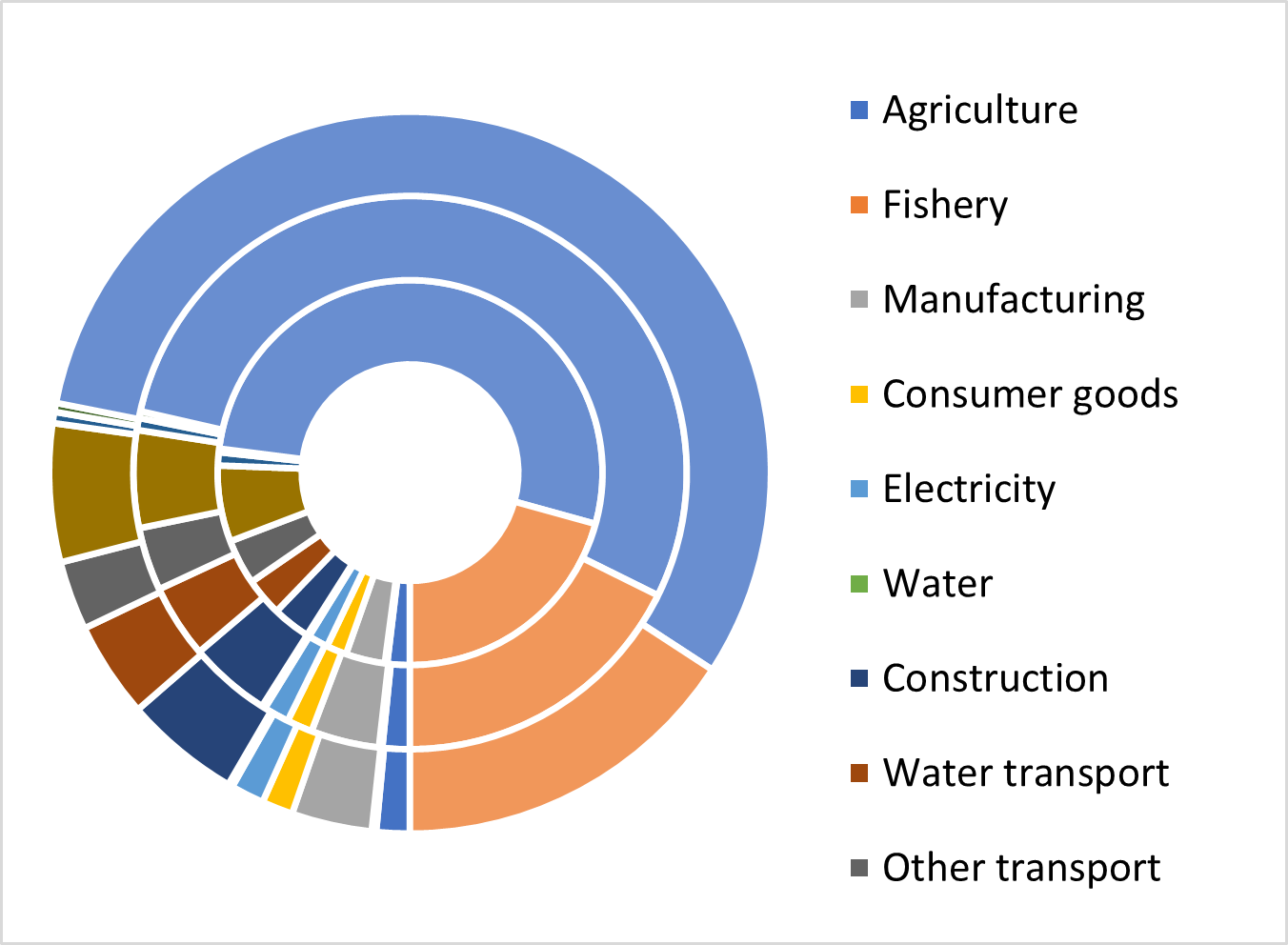 END_OF_DOCUMENT_TOKEN_TO_BE_REPLACED

The following partners are involved in the study of Cyprus: CYPRUS INSTITUTE(CYI) INTERFUSION SERVICES(IF) The following local stakeholders have declared their interest in participating in the local study of Cyprus in the frame of the Soclimpact project....