In 1469, Ferdinand II of Aragon (king of Aragon) and Isabella I of Castile (queen of Castile) were married. After their deaths, their respective territories (until then governed separately) were governed jointly, in the person of their grandson, the Emperor Charles V. This can be considered the foundation of the modern Spanish state, albeit a decentralised one wherein the various component territories within the united crowns retained their particular historic laws and privileges.

The island of Menorca was a British dependency for most of the 18th century as a result of the 1713 Treaty of Utrecht. This treaty—signed by the Kingdom of Great Britain and the Kingdom of Portugal as well as the Kingdom of Spain, to end the conflict caused by the War of the Spanish Succession—gave Gibraltar and Menorca to the Kingdom of Great Britain, Sardinia to Austria (both territories had been part of the Crown of Aragon for more than four centuries), and Sicily to the House of Savoy. The island fell to French forces, under Armand de Vignerot du Plessis in June 1756 and was occupied by them for the duration of the Seven Years’ War.

The British re-occupied the island after the war but, with their military forces diverted away by the American War of Independence, it fell to a Franco-Spanish force after a seven-month siege (1781–82). Spain retained it under the Treaty of Paris in 1783. However, during the French Revolutionary Wars, when Spain became an ally of France, it came under French rule.

Menorca was finally returned to Spain by the Treaty of Amiens during the French Revolutionary Wars, following the last British occupation, which lasted from 1798 to 1802. The continued presence of British naval forces, however, meant that the Balearic Islands were never occupied by the French during the Napoleonic Wars.

The Balearic Islands constitute the westernmost Spanish archipelago in the Mediterranean. With a total area of 4.984 km2 and a population of 1.150.962 inhabitants (Eurostat, 2018). The co-official languages are Catalan and Spanish. Regarding to the geographical characteristics, the highest mountain is located in Mallorca (Puig Major in the Serra the Tramuntana) has an altitude of 1.432 m. The minimum distance separating Mallorca from Menorca is 35 km, and Ibiza is 75 km far from Valencia. The islands enjoy a mild climate with an annual average of 2.850 hours of sunshine and an average annual temperature of 18ºC. The main international airports are on Mallorca, Menorca and Ibiza. Access to the island of Formentera is only possible by ferry boat. There are seven ports with regular sea lines that host around 98.000 passengers.  The islands can be reached via ferry and airplane. 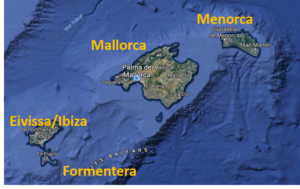 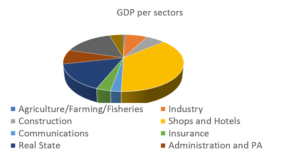 The Balearic Islands economy remains a service-led economy throughout the 2015-2100 period with an increasing contribution of other market services, construction services and other transport services. Whereas declining shares in overall gross value added are projected for accommodation and food services as well as non-market services, both sectors are still projected to provide significant contributions (more than 27%) to total gross value added in 2100.

Total tourism activities are projected to provide rather stable contributions to total gross value added throughout the projection period. Starting from more than 18% in 2015, the respective shares decline slightly to less than 17% in 2100. 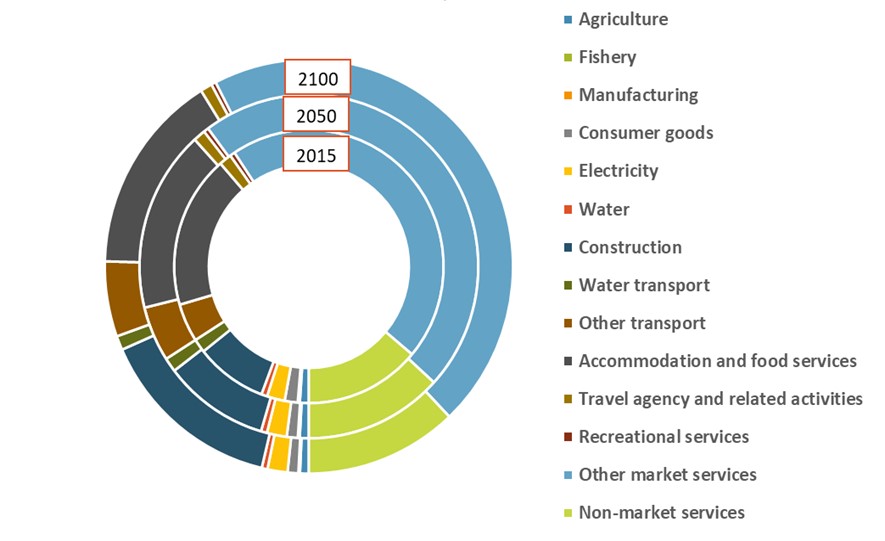 Tourism is the island’s most important source of income, contributing to approximately 35% of the GDP, and closing 2019 with 16.45 million tourists. Even though arrivals have decreased 0.6%, tourist spending increased 1.4% last year to 16.51 billion euros,...