The islands were known in the fourteenth century, and parts of them appear in the Catalan Atlas. In 1427, a captain sailing for Prince Henry the Navigator, possibly Gonçalo Velho, may have rediscovered the Azores, but this is not certain. In Thomas Ashe‘s 1813 work, A History of the Azores, the author identified a Fleming, Joshua Vander Berg of Bruges, who made landfall in the archipelago during a storm on his way to Lisbon. He stated that the Portuguese explored the area and claimed it for Portugal. Other stories note the discovery of the first islands (São Miguel Island, Santa Maria Island and Terceira Island) by sailors in the service of Henry the Navigator, although there are few documents to support the claims. Although it is commonly said that the archipelago received its name from açor (goshawk in Portuguese), a common bird at the time of discovery, it is unlikely that the bird nested or hunted on the islands (Source: Wikipedia)

Historically there are references to nine islands in approximate locations of the Azoreans in the Atlantic Ocean, in books and cartographic maps since the middle of the fourteenth century. But it is with the Portuguese maritime epoppe, led by Infante D. Henrique, that the Azores enter definitively on the map of Europe.

The nine islands of the Archipelago of the Azores are all of volcanic origin and are located in the middle of the North Atlantic, dispersed along a 600 km long stretch from Santa Maria to Corvo and approximately between 37° and 40° north latitude and 25° and 31° west longitude. Some 246,772 people live (data from 2011) in this island territory of 2,325 km2, which is at a distance of 1,600 km from the European continent and 2,454 km from the North American continent (Canada). The population distribution is around half for the main island São Miguel, one quarter to Terceira island and the remaining islands account for another one quarter.

Resistance to Spanish rule in the crisis of dynastic succession of 1580 and support for the liberal cause in the civil war (1828-1834) are revealing of the courage of the Azoreans. Already in the twentieth century, this bravery survives in the whaling epic, when the men throw themselves in small wooden boats for the confrontation in the immense blue sea with the sperm whales.

The Azores have been autonomous since 1976 and have self-governing institutions. They can levy own taxes and participate in international negotiations for treaties and agreements which concern their region.

The economy of the Azores remains a service-led economy throughout the 2015-2100 period with an increasing contribution of other market services, other transport services, electricity, water and accommodation and food services.

The aggregated gross value-added shares of agriculture, fishery, manufacturing and consumer goods sectors is projected to decline slightly from above 15% in 2015 to about 13% until 2100. The respective shares of electricity and water services are projected to increase only slightly until 2100. Construction activities contribute between 7% and 8% to total gross value added throughout the projection period. 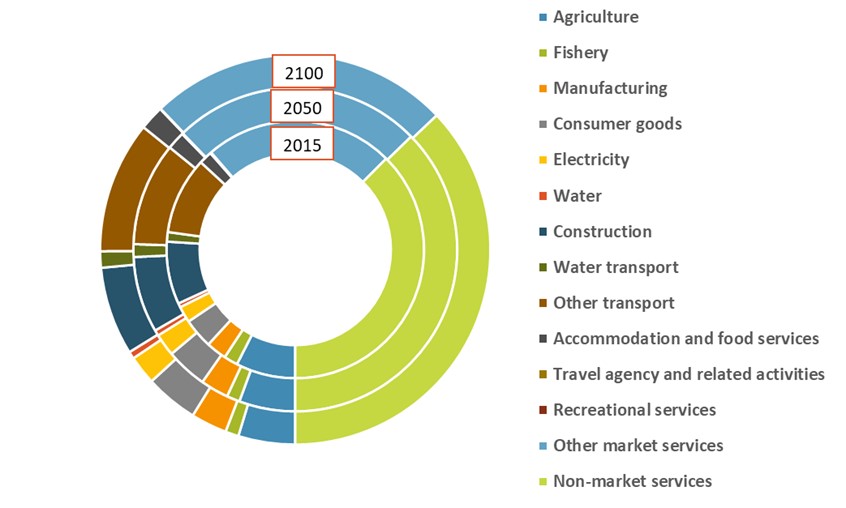 The expression “surrounded by nature on all sides” could well be used to typify the Region of the Azores. Numerous recreational boating, maritime (e.g. cruises, diving, whale watching, swimming with dolphins, sport fishing) and nature activities (e.g....

END_OF_DOCUMENT_TOKEN_TO_BE_REPLACED

The following partners are involved in the study of Azores: FCiencias.ID (Island Focal Point) The following local stakeholders have declared their interest in participating in the local study of the Azores islands in the frame of the Soclimpact project:...