The history of Sicily has been influenced by numerous ethnic groups. It has seen Sicily sometimes controlled by external powers – Phoenician and Carthaginian, Greek, Roman, Vandal and Ostrogoth, Byzantine Greek, Islamic, Norman, Aragonese and Spanish – but also experiencing important periods of independence, as under the indigenous Sicanians, Elymians and Sicels, and later as the County of Sicily and Kingdom of Sicily. The Kingdom was founded in 1130 by Roger II, belonging to the Siculo-Norman family of Hauteville. During this period, Sicily was prosperous and politically powerful, becoming one of the wealthiest states in all of Europe.

As a result of the dynastic succession, then, the Kingdom passed into the hands of the Hohenstaufen. At the end of the 13th century, with the War of the Sicilian Vespers between the crowns of Anjou and Aragon, the island passed to the latter. In the following centuries the Kingdom entered into the personal union with the Spaniardand Bourbon crowns, preserving however its substantial independence until 1816. Although today an Autonomous Region of the Republic of Italy, it has its own distinct culture.

Sicily, in the south of Italy, is the largest and one of the most densely populated islands in the Mediterranean Sea. Together with its surrounding islands, Sicily forms an autonomous region of Italy. The island is mostly mountainous with a seismic and volcanic activity quite intense. Here there is the Europe’s highest active volcano, Mount Etna (3.350 meters). The only wide valley is the fertile Plain of Catania in the east. The climate is subtropical and Mediterranean. Underground water and springs are plentiful. The natural vegetation of Sicily has been greatly reduced by human influence, and forests occupy only 4 percent of the territory. 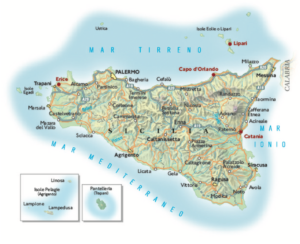 The economy of Sicily remains a service-led economy throughout the 2015-2100 period. How- ever. a transition from non-market towards market services is projected. Construction registers an increasing share in total value added. following the trajectory of investments. The share of Blue economy sectors in total value-added falls slightly in the 2015-2100 period. as tourism falls slightly below 10% of GDP. 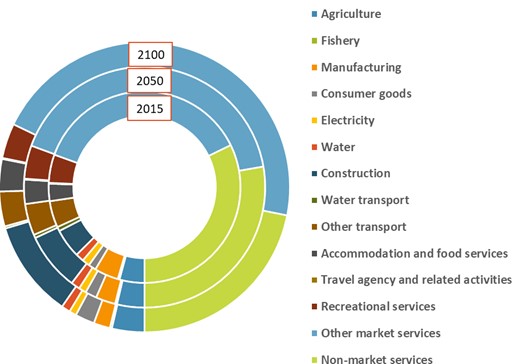 Sicily's sunny, dry climate, scenery, cuisine, history and architecture attract many tourists from mainland Italy and abroad. The tourist season peaks in the summer months, although people visit the island all year round. Tourism is one of the most...