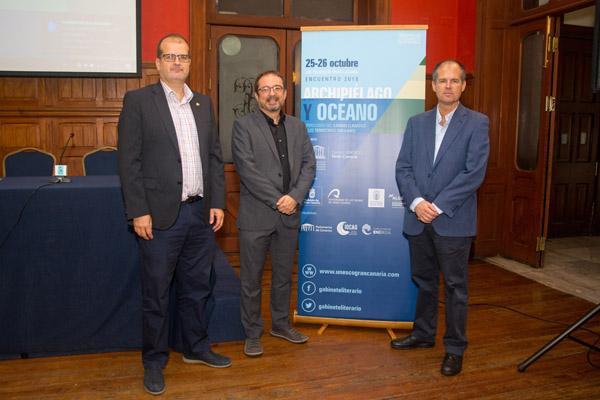 20 experts from Macaronesia area meet to talk about Climate Change impacts in island territories. It was held on 25 and 26 October 2018 in the Literary Cabinet (free entrance) to general public, explaining about the repercussions of Climate Change in insular territories.

It was organized by the UNESCO Centre Gran Canaria on 25 and 26 October 2018 at the Gabinete Literario, with the collaboration of the Cabildo de Gran Canaria and the IOCAG of the ULPGC.
Experts included managers, scientists and politicians from the four regions of the Macaronesia, who participated in this multidisciplinary meeting, with the Counsellor of Economic Development, Energy and R&D of the Cabildo de Gran Canaria, Raul Garcia Brink, the Vice Rector of Research, Innovation and Transfer of the ULPGC, Jose Pablo Suarez, and the Director of IOCAG, Alonso Hernandez. The meeting referred to the latest report of the Intergovernmental Panel on Climate Change (IPCC) stating that “climate change is the canvas on which the history of the 21st century will be painted”.

The reality of the Azores, Madeira, Cape Verde and the Canary Islands was presented throughout two sessions debating on most effective tools to combat climate change, under the premise that island territories are more vulnerable to its effects than continental ones. Organisations such as the Spanish Meteorological Agency (Aemet), the Regional Directorate for Regional Planning and the Environment of Madeira, the National Institute of Meteorology and Geophysics of Cape Verde, the Institute of Marine Sciences – CSIC or the aforementioned IOCAG, among other leading scientific institutions, contribute the most innovative research to the debate.

This event was an important step to capture the attention of the main local leaders and decision makers. The event counted with the presence of several researchers of SOCLIMPACT, allowing the sharing of the main aspects covered by the project, from a multidisciplinary perspective.