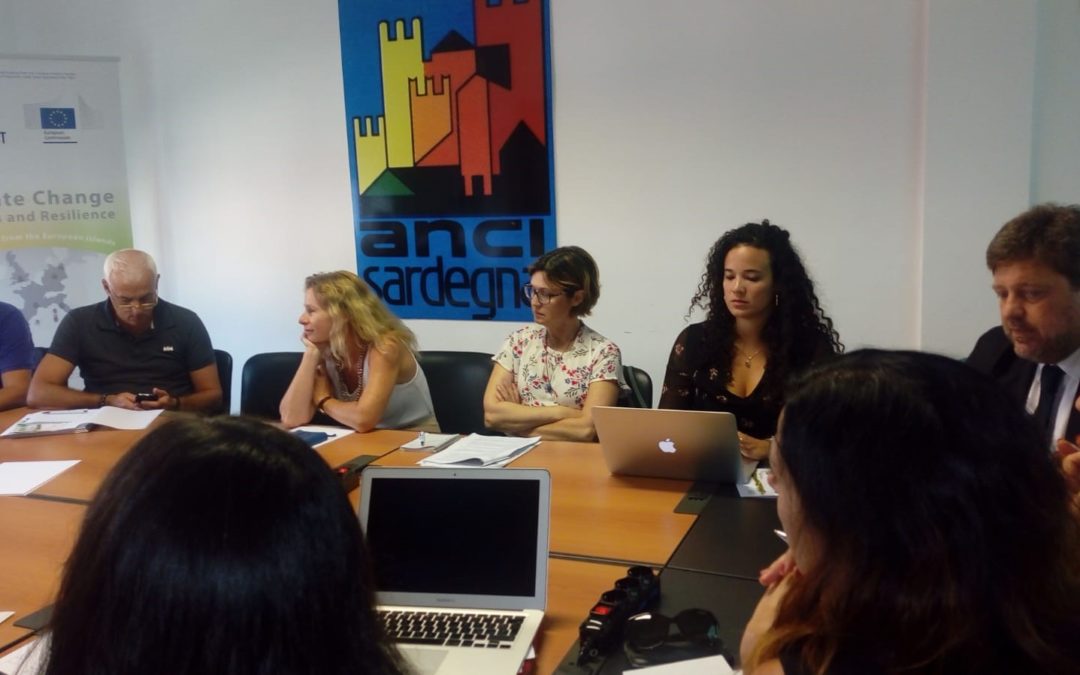 Last 20th of September, SOCLIMPACT held the first Local Working Group for Sardinia. The meeting was attended by many high-level representatives of the Regional Government (Environment, Planning, Civil Protection and Tourism Divisions) joint to a multidisciplinary group of researchers from UNICA ( University of Cagliari), the Chamber of Commerce and the Regional Environment Protection Agency, among other institutions in charge of tourism, fisheries, aquaculture and maritime planning. During the meeting, the Counsel for the Environment Division presented the Regional Adaptation Strategy of the island, followed by an open debate about the usefulness of SOCLIMPACT results and the benchmarking with other islands.

The workshop also served to identify linkages with other EU H2020 project such as CLISEL and obtain first-hand information regarding climate governance perspectives and priorities from local municipalities in the context of insularity, and its outstanding value for our Sardinia case study.

The workshop was organized by our partner ANCI Sardinia, the Association of Sardinian Municipalities, with support of the Coordinator ULPGC. The SOCLIMAPCT partner,  CMCC also attended the session. At the end of the meeting, all stakeholders stated positive intentions to collaborate with the project and to organize future meetings according to the different phases of the work-plan, specific data requirements, or presentation of the first results.

After the inscriptions and welcoming words of the Director of ANCI Sardinia, and Donatella Spano, the Counsel for the Environment Department of the Regional Government, remarked the relevance of SOCLIMPACT project. She informed that this current Counsellor was the one who first recently introduced the Climate Change topic in the Regional Strategy, which means a step forward to the regional development. She also remarked that they coordinate the environment commission at a national level and are the ones more interested in this type of project with downscaled projection, to better understand the climate challenges for the Region and the policies needed to counteract their effects. An important point she stated was the imperfection of the EU codification of sectorial activities at a regional level, which limits the adoption of the international methodologies for climate change studies.

In the second part of the meeting, Daniela Sitzia (Vice-Director of ANCI) presented the project. She explained each objective, the composition of the consortium, and the sectors of study and their relevance for Sardinia ´s economy. She also highlighted the role of stakeholders and the benefits derived from the expected results of the different phases of the research.

After these interventions, a round table of stakeholders was held where possible contributions and questions were debated.

Among the proposed contribution highlighted the following:

–  ARPAS (the regional agency in charge of meteorology data) was proposed as a stakeholder, especially for the indicator’s development for the impact chain in Sardinia.

– Some deliverables from CLISEL project could serve as input for SOCLIMPACT project to understand the state of the art of climate adaptation policy in Sardinia and the hot topics within the same.

– Director of Fisheries and Aquaculture of Coldiretti remarked the importance to raise awareness in the aquaculture sector for the island because this is an activity under high risk and is receiving very little attention from the public side. In this sense, SOCLIMPACT project has exceptional value regarding the inclusion of the sector as a priority activity to be studied in the Region. In his view, the lack of consciousness is a result of the current situation.

Stakeholders also debated on climate governance structure, and priority sectors for the island, in this respect, the main questions proposed were:

– At what point are the reflections of Blue Economy in Sardinia?

– What is the progress of adaptation pathways in Sardinia?

– What is the institutional framework of Sardinia climate policies?

– Are there any specificities (data available I the regional statistical system?

In addition to these questions, some topics highlighted were the strategic sectors, the main challenges. In this sense, Agriculture, forestry and hydrology are the main sectors that have received academic attention, concerning the climate modelling and adaptation strategies for extreme events. The main challenge has been the implementation of the proposed measures at the local level and also their adaptation to the EU commitment.

Tourism as a transversal discipline is a very complex field of study, but also a platform for the study of the behaviour of individuals in front of specific impacts or policy.

There was a debate about if the change in the marine biodiversity necessarily leads a reduction of the tourism potentialities. Some tourism marine-based activities could be beneficiated, which triggered a discussion around a modification of the impact chain. Still, finally it was decided not to change it because the contamination and biodiversity reduction are the primary impacts resulting from the sea temperature increase.

The session ended with a commitment from stakeholders with the SOCLIMPACT project to use the project as a tool in the fight against climate change and to bring useful information for the Region, regarding the identification of suitable adaptation measures with viable application to the island. The Regional Government had previously identified this need.