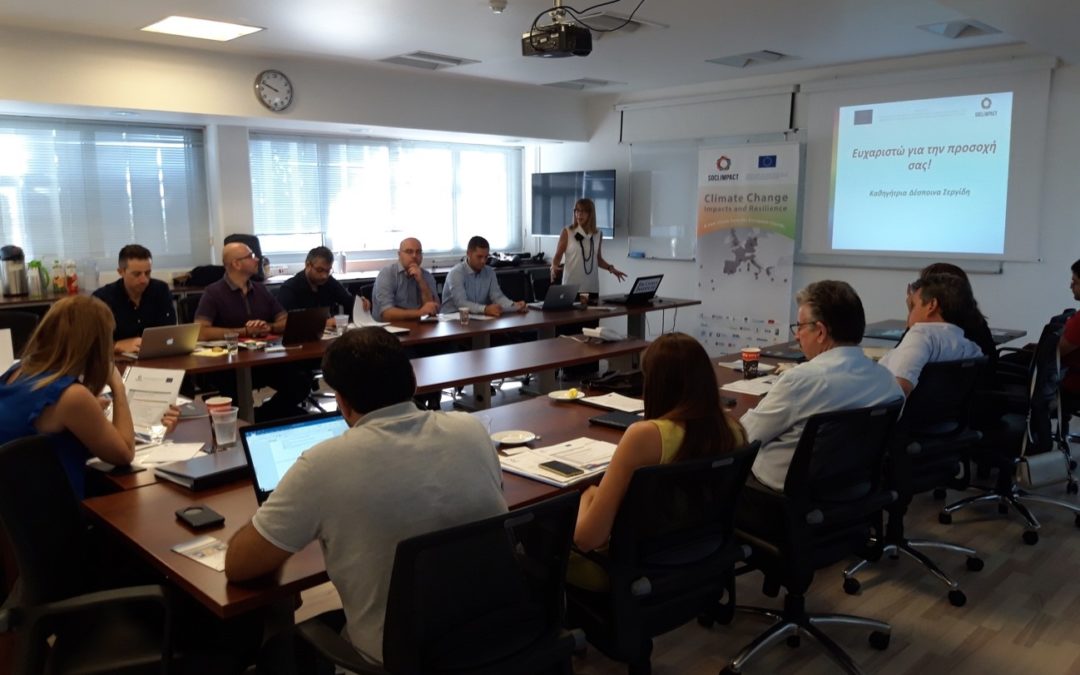 SOCLIMPACT keeps going with its local working groups. This time was the island of Cyprus the Region of study as part of the project.

The event was presented by Despina Serghides, who made a general presentation of the project describing the partner organizations, the participating islands, the Blue Economy sectors, the project work packages and the role of stakeholders, the expectations from them and the benefits for them.

With regards to the expectation from stakeholders, Despia highlighted the following aspects:

On of the most important parts of the meeting was the presentation of Climate Change (CC). Constantinos Stylianou presented an analysis of the impacts of CC. A list of hazards and subconsequent risks was shown for each BlueEconoy secotr. In addition, for each sector, one example of an impact chain was provided in order to illustrate the interaction between hazards, risks, vulnerabilities and exposure for particular cases in Cyprus. These were:

The presentation also emphasized the importance of data for the project (availability, access, collection, format, etc.) for the purposes of modelling. To this, Athina Papanastasiou commented that official public data is stored, analyzed and distributed by the Cyprus Statistical Service, once it collects them from the various government ministries and departments. Newer data that will be required during modelling that are not yet officially published can still be provided by government ministries and departments.

The event kept going with a roundtable discussion on Blue Economy Sectors and Priority Impacts. The stakeholders provided concerns, information, data and current project that can create synergies with SOCLIMPACT.

Athina Papanastasiou form Cyprus department Environment was involved in activities regarding the management of the quality of bathing waters in Cyprus, such as mapping and profiling the areas. She is willing to help with data if the project require it.  Athina also described the Blue Island project (Interreg-Med), which aims to identify, address and mitigate the effect of the seasonal variation of waste generated on Meditteranean islands as an effect of tourism. So there are data and strategies, as well as circular economy package available.

Valkis Loizides, from Cyprus Tourism Organization stated that the tourism secot will definitely benefit from this project since development of the tourism industry is “Blue” and focuses greatly on coastal areas.

He also informed that statistical data regarding the industry, such as tourist spending and accommodation figures, are available.

He described two initiatives related to sustainable tourism: (1) the Blue Flags initiative for beaches in order to effectively and efficiently manange the use of beach areas and (2) the Green Key initiative for certification of hotels and restaurants.

He also mentioned the Iron Earth and CYPADAPT projects. Regarding CYPADAPT, the purpose of the project was to strengthen and increase Cyprus’ adaptive capacity to Climate Change impacts through the development of a National Adaptation Strategy.

Finally, he suggested we include AKTI Project and Research Centre as a stakeholder, which is a non-governmental, non-profit organization that has an extensive network of collaborators

Sophia Louka from Cyprus Department of Meteorology commented that meteorological data (regarding the sea, winds, etc.) is available and could be provided by the Department.

Ms Chrystalleni Papadopoulou from Cyprus Certification Company remarked that the organization will be able to help evaluate how standardizations and certifications could affect the Blue Economy sectors based on the assessment of impacts.

Daniel Hayes from Cyprus Subsea Consulting and Services raised a concern about the lack of a unified database for Cyprus where all types of data (such as relating to hazards, risks, socioeconomic impacts, etc.) are homogenized, stored and available to practitioners.

Giorgos Anastasiades from Cyprus Department of Fisheries and Marine Research stated that aquaculture is the largest fishing activity in Cyprus and considers that this sector should be a priority together with tourism.

He also explained to us how hazards, such as sea temperature rise, salinity level changes, and increased number of invasive species, etc., affect fish stock. Consequently, it will be beneficial for fish farmers to be able to have a means to be alerted of any adaptations they should make with the help of forecasting tools. However, there are limitations as not all fish farmers will have the technical know-how to conduct these projections. An alternative would be to disseminate/circulate material documenting the results/projections in a format understandable to each type of stakeholder.

The meeting ended with a favourable perception by SOCLIMPACT regarding the stakeholder´s predisposition to collaborate with data and the creation of synergies through other projects. This commitment is crucial for the develop and well-use of the project, that is why the celebration of Local Working Groups is vital for the development of the project.