Dr. Carmelo León, director of the University Institute TIDES of the ULPGC, and coordinator of the SOCLIMPACT Project funded by the EU through the call H2020, attended the Official Conference of the Parties (COP25), taking part in an event entitled “Climate Action in Travel & Tourism – COP25 programme” organised by The World Travel and Tourism Council (WTTC) and the COP. 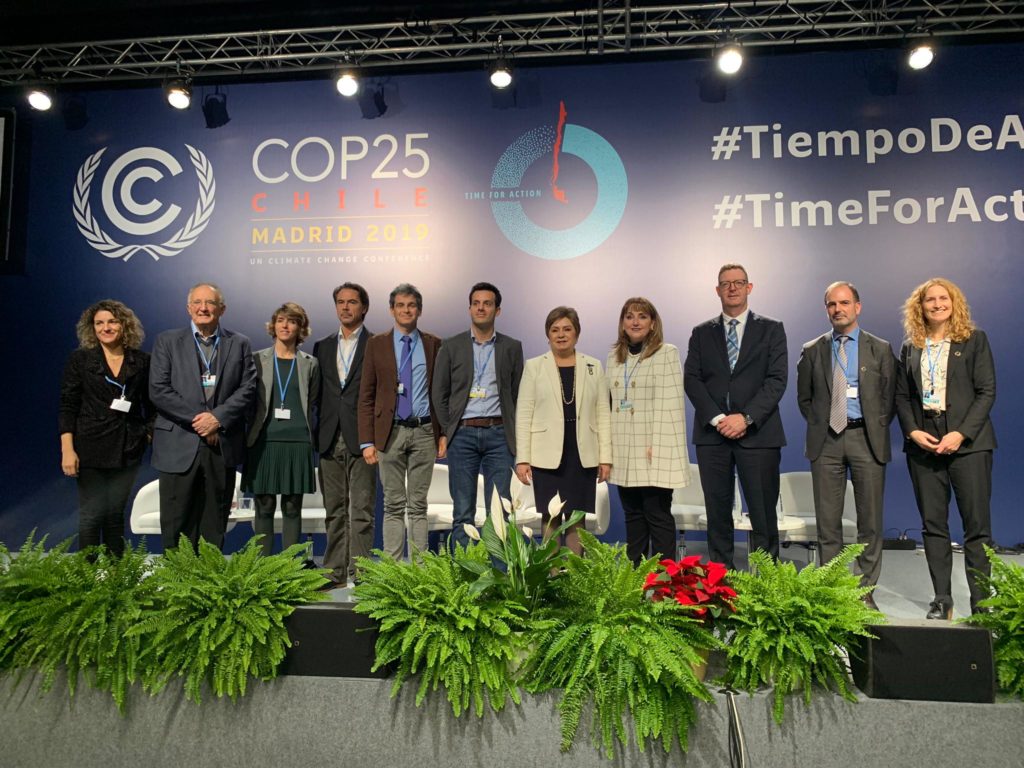 The event, which was attended by personalities at the highest level in Climate Change issues, began with the intervention of the United Nations Executive Secretary for Climate Change, Patricia Espinosa and was presided over by Gloria Guevara, President and Executive Director of the WTTC.

The interventions were led by representatives of the tourism industry (Iberia, Europamundo Vacaciones, CLIA) as well as the environmental sector (GSD, IETA, Acciona) and moderated by Professor Geoffrey Lipman, Co-founder of the SUNx Programme – Strong Universal Network. On this occasion, Dr. Carmelo León participated as a keynote speaker (laying the scientific foundations for the debate) and as a lecturer highlighting the role and the importance of the SOCLIMPACT project in facing the challenges that Climate Change represents for tourism.

Taking advantage of the celebration of thisinternational summit in Spanish territory, Dr. Carmelo León used examples of the Canarian economy, such as the case of the recent fires in Gran Canaria and how this event affects the future decisions of the tourist when choosing adestination, the economic losses in terms of renewal costs, or those costs related to the deterioration of the image and the loss of value of the tourist experience.

The central theme of the event revolved around the importance that travel and tourism has for the economy and society worldwide, which has allowing millions of people to discover new destinations, meet family and friends and generate thousands of jobs, especially in developing countries, which has revealed this sector as a true global economic power.

The tourism and travel industry accounted for 10.4% of world GDP in 2018, thus becoming the leading industry in the economy, trade, employment and development worldwide. However, it is also a sector that contributes about 8% of global greenhouse gas emissions.

In this sense, the World Travel and Tourism Council has set a goal for 2050 for the sector to become climate neutral, a challenge that many companies are already demonstrating by reducing the impacts of their activities. The session focused on the analysis of what is needed and what travel and tourism companies are doing to achieve this goal.

Last year, the organisation signed up to the United Nations Climate Neutral Now initiative with a commitment to measure its greenhouse gas emissions, reduce what it can and offset the rest, while promoting the same climate-friendly regime to its 15 members worldwide

“The ravages of climate change will soon require all of us, governments and corporations in particular, to do things differently”, Espinosa said, citing a recent open letter from the directors of major financial institutions: “If some businesses and industries don’t adjust,” they will simply cease to exist.

Among the opening remarks at the event, President and CEO, Gloria Guevara, noted that the message is clear: “Climate and the environment are top priorities.” She also pointed out that we need to find a way to offer “environmentally friendly” travel (…) adding:”Not traveling, may help the environment but it would be very irresponsible” as it would lead to greater poverty, higher unemployment,and ultimately greater damage to the environment.