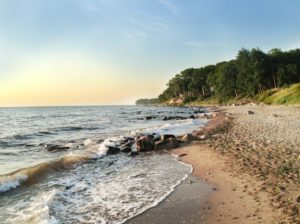 Tourism is the island’s most important source of income. Approximately 300,000 overnight guests stay on Fehmarn every year, with the vast majority being German (~99%). Many tourists stay on one of the huge campsites that are situated at different locations along the coastline. A lot of people use the same caravan pitch for many years or even decades and visit regularly during holidays and on weekends throughout the season. For people from northern German municipalities, Fehmarn is also a popular day trip destination as the connecting mainland bridge makes the island easily accessible by car.

Maritime transport does not play an island-typical role as most cars and trains arrive via the Fehmarn Sound Bridge from the German mainland. Most maritime transport is happening at Puttgarden harbour, where the ferry connection to Denmark operates. It forms part of the shortest route between Hamburg and Copenhagen and has been heavily used for centuries. Apart from Puttgarden, maritime traffic in Fehmarn is rather small scale with no remarkable international ship traffic going on. Burgstaaken, the second largest port, serves as the home port for local fishing boats, and for shipping agricultural products to the German mainland. It also has touristic infrastructure with a submarine museum, a marina, and gastronomy.

Currently there is a restructuring of this important traffic artery going on with roads and trains being prepared for the planed tunnel from Fehmarn to Denmark, a gigantic traffic project that is very controversially discussed in the whole region. This “Fehmarn Belt Fixed Link”, an 18 km long tunnel for train and car traffic has been planned to be finished in 2028. The new tunnel, which will be the longest rail tunnel in the world, should replace the currently used ferry service run by the ferry-company Scandlines. The tunnel project faces repeated delays because of ongoing lawsuits and unclarities in the financial planning as well as expected negative environmental impacts.

Due its geographical location, Fehmarn is a large producer of renewable energy and the island’s wind parks are economically relevant. Even though Fehmarn’s inhabitants initially had doubts concerning the wind parks and their effect on their lives, most of them now have a positive attitude towards them. According to data from 2015, the wind turbines produced approximately 443,160 MWh/Year, which was around 464% of the island’s energy demand. As there are also an above-average number of solar installations per capita, as well as energy generation from biomass, Fehmarn’s energy production from renewable energy sources surpasses its electricity consumption by far, and Fehmarn is producing almost 5 times the island’s energy demand solemnly from renewable sources. Fehmarn’s electricity grid is connected to the German electricity grid and most of the island’s energy is being exported to the mainland.

Earlier names of the island are Femera, Fimbria, Cimbria parva, and Imbra. As a part of Wagria it was settled by the Slavic Lechitic tribe of Wagri in the Early Middle Ages; the name derives from Old Slavic fe more (in the sea), modern v more. After their...